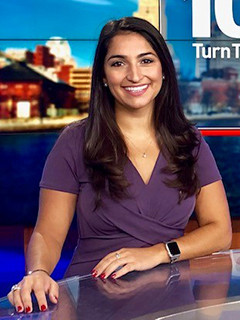 Amanda Hoskins joined the NBC 10 Night Team team in September 2019. As a Rhode Island native, she is excited to be back to tell stories in a place that she has always called home.

Before coming back to NBC 10, Amanda worked for WHP-TV in Harrisburg, Pennsylvania, and WALB in Albany, Georgia. She covered a number of national headlines, including a 48-hour manhunt, a decades-old cold case and a deadly tornado. She was also nominated for an Emmy for her coverage on the 40th anniversary of the Three Mile Island partial nuclear meltdown.

Amanda graduated from Quinnipiac University, where she double majored in journalism and Spanish.

After being in Falcons and Eagles territory, she is eager cheer on her beloved New England Patriots with fellow fans. Amanda enjoys running, cooking and spending time with family.

Feel free to send her your stories by emailing her at achoskins@sbgtv.com or reaching out to her on Facebook.