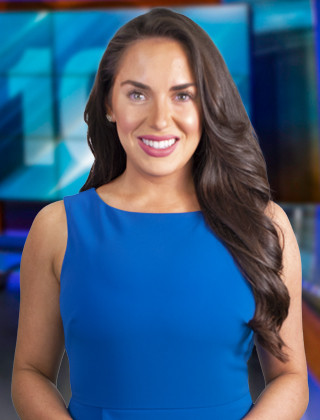 Rosie Woods is the traffic anchor for the NBC 10 News Sunrise team and co-host of “Studio 10," a lifestyle show airing weekdays at 12:30 p.m.

Prior to joining us here at WJAR, Rosie worked as an anchor and reporter in Asheville, North Carolina; West Palm Beach, Florida; and Providence.

While in Asheville, Rosie spearheaded a groundbreaking digital webcast that garnered hundreds of thousands of views each week. She also started an entertainment segment called "Trending Now" on their morning show and anchored their Breaking News Desk. One of her fondest memories was interviewing Donald Trump Jr. one-on-one just days before the 2020 election.

While in South Florida, Rosie reported on numerous national news stories, including the tragic school shooting at Marjory Stoneman Douglas High School, a shooting investigation at Trump’s Miami-Dade golf course, and the collapse of the Florida International University pedestrian bridge.

Rosie was also the sideline reporter for the Boston Marathon two years in a row while working in Providence. She also covered the New England Patriots 2016 Super Bowl run from Gillette Stadium.

Rosie was born and raised in Milton, Massachusetts, and graduated from Boston University. During her free time, she loves to run, work out, play tennis, and explore new restaurants.

She is thrilled to be closer to her family and friends, and back in Rhode Island!