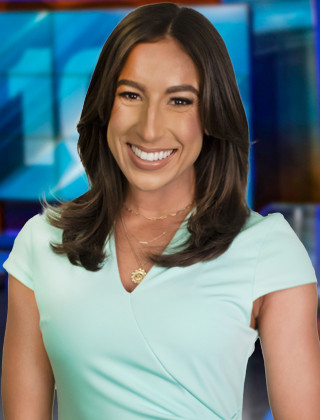 A Southern California native, Taylor Rocha is an Emmy award-winning sports reporter who joined NBC 10 and the Providence community in September 2021.

Before joining the team, Taylor worked in Wichita, KS where she covered the Kansas City Chiefs’ first Super Bowl championship in 50 years and received Kansas Association of Broadcasters awards in the ‘sports feature’ and ‘sportscast’ categories.

Taylor is a proud graduate of the Walter Cronkite School of Journalism and Mass Communications at Arizona State University. Forks up! During her time in Phoenix, she worked for the Arizona Diamondbacks, covered spring training for Sports Illustrated and freelanced with ESPNU, Fox Sports AZ, the Pac-12 Network and SB Nation.

At a young age, Taylor began competitive cheerleading, which allowed her to travel the country with her mother, while developing her competitive spirit. Her comfort on the sideline is a result of countless games supporting her two younger brothers. She attributes her love of sports to her father, who is a walking sports encyclopedia. She grew up rooting for whatever team he was rooting for, which was always a Bay Area team.

Taylor is proud to take the next step in her career in New England. She enjoys the diverse culture, beautiful beaches and diehard sports fans. When she’s not on the beat she enjoys working out, reading, fashion, hunting for the best Portuguese food in the area and cheering on her beloved Sun Devils. Above all else, Taylor loves people. She hopes to inspire others to be fearless in life, to try new things and to have fun doing it!

If you have a story idea, or just want to say hello — you can email Taylor or message her on Twitter. You can also find her on Facebook and Instagram.