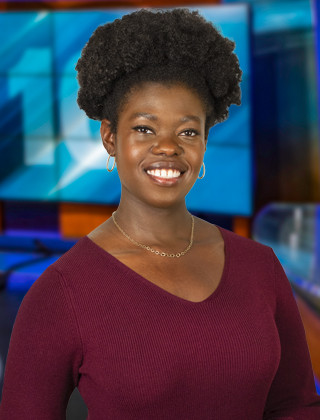 Temi-Tope Adeleye joined NBC 10 News as a multimedia journalist in November 2021. Adeleye is a first-generation Nigerian American, born in New York and raised in Georgia.

She graduated from Western Carolina University in North Carolina with a bachelor’s in communications and a concentration in broadcasting.

Adeleye is not a stranger to New England. She graduated from Emerson College in Massachusetts with a master's degree in journalism. She interned with CBS Boston and traveled to South Africa as an ambassador for the college’s journalism department.

NBC 10 News is Adeleye’s third news station. She worked as a multimedia journalist at KEYC News Now in Mankato, Minnesota. She reported, produced, anchored, and hosted a weekly food segment.

Her second stop was Paducah, Kentucky, where she worked as a multimedia journalist and weekend morning news anchor.

Adeleye has reported on animal abuse cases, the pandemic’s effect on healthcare workers, and possible budget cuts for a popular recreational area.

Adeleye is excited to be back in New England, learning about our communities and telling our stories. If you have story ideas, please do not be a stranger and e-mail her at taadeleye@sbgtv.com.